I want to welcome Louise Lyons back to the blog with her new release Beyond The Scars! I absolutely love the cover: 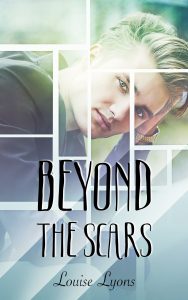 After years of physical and mental abuse, Tommy Chadwick finally finds the strength to leave Colin, his tormentor. But Tommy soon finds that escaping his violent boyfriend was only the first step on his path to recovery.

Now he must overcome feelings of worthlessness in order to rebuild his battered self-esteem.

Tommy’s lack of self-confidence prevents him from going out… at first, but then has him ricocheting from one man to another, desperately trying to please them in his search for love and acceptance.

After being rejected on New Year’s Eve, and then beaten after leaving the gay bar, he agrees to accompany his best friend, Sarah, to a martial arts club. There Tommy meets Marcus, a strong older man, who at first becomes his friend, introducing Tommy to new interests, and later, tentatively asks him on a date.

Will Marcus be the man to help Tommy put his past behind him and fall in love for real?

My colleagues looked at me in surprise when I walked in. None of them knew about my situation. They knew I was gay, but nothing else. It was clear I seemed different to them, and I gave them each a smile as I sat down at my desk. I planned to turn things around from now on. I was the junior IT specialist, and with my supervisor set to retire in the next year, I wanted to work hard and get a promotion rather than have them bring in another senior above me. Such a thing would never have crossed my mind a week ago. But now whatever else I might fail at, I was determined to do well in my work.

It was ten o’clock when my desk phone rang. I had a direct-dial number which put people straight through to me without them having to go via the receptionist. I answered, as usual, with the company name and then my own.

I stopped breathing and felt a shiver run down my spine at his voice. I’d tried to tell myself he’d leave me alone and that I’d never hear from him again, but I wasn’t surprised that hadn’t happened. I gave myself a quick pep talk while I struggled to control my panic. Get a grip. He can’t hurt you anymore.

“Can we talk? Please, sweetheart?” He always wheedled after he’d beaten me or mentally tortured me. The sweet words would expand into how much he loved me and how he regretted it and he’d never do it again. He only hurt me because he was so crazy about me and he couldn’t stand the thought of losing me. I sucked in a breath and swallowed hard.

“Go to hell.” I placed the phone handset gently back in its cradle and clenched both fists on the desktop. My heart slammed against my ribs and I could hear rushing in my ears. I took another deep breath and another, afraid I might faint.

“Tommy, are you okay? You’re a bit pale.” One of the older women in the office came to my desk. “Shall I make you a cup of tea?”

“No, thanks, Margaret, I’m fine. Someone stepped on my grave, that’s all.” I shook myself and forced a smile onto my face as I looked up at her. “It’s all good.”

“You know, you seem a bit different today. Brighter. Did you leave him?”

“My daughter’s been through it,” she said quietly. “Some years ago. Her husband beat her several times and threatened the kids. She looked just like you did until last week. And just like you do now when she got away.”

I felt any remaining color leach out of my face, and I found I couldn’t look away from her kind brown eyes. A fellow survivor—or at least her daughter was.

“Is she okay?” I whispered.

“She is now. She’s happy with a new man. Planning to marry next year. How about you?”

“I’ll be okay. I moved in with my friend and her mum.”

“Was that him on the phone?”

“Well, you know where I am if you want to chat,” Margaret said. “If you need somebody who’s seen it all before, we can go for a drink or something. If you ever want to. As for him… if he’s anything like my ex-son-in-law, they’re mostly cowards inside. If you stand up to him, he’ll realize he can’t bully you anymore and it’ll be over.”

“Thank you, Margaret.” I gave the woman a more genuine smile. She left me and went back to her desk, and I got on with my work. I didn’t get another call, either that day or the next or the one after that. Just like that, he’d given up, although it took me longer than a few days to accept it. It was weeks before I stopped looking over my shoulder, and I found it difficult to believe he would just let me go. Every time my phone rang, I answered it with trepidation. Wherever I went, I glanced furtively around me, looking at every face I passed, certain it was only a matter of time before I ran into him. But I never did.

Louise Lyons comes from a family of writers. Her mother has a number of poems published in poetry anthologies, her aunt wrote poems for the church, and her grandmother sparked her inspiration with tales of fantasy. Louise first ventured into writing short stories at the grand old age of 8, mostly about little girls and ponies. She branched into romance in her teens, and MM romance a few years later, but none of her work saw the light of day until she discovered FanFiction in her late 20s.

Posting stories based on some of her favorite movies, provoked a surprisingly positive response from readers. This gave Louise the confidence to submit some of her work to publishers, and made her take her writing “hobby” more seriously.

Louise lives in the UK, about an hour north of London, with a mad Dobermann, and a collection of tropical fish and tarantulas. She works in the insurance industry by day, and spends every spare minute writing. She is a keen horse-rider, and loves to run long-distance. Some of her best writing inspiration comes to her, when her feet are pounding the open road. She often races into the house afterward, and grabs pen and paper to make notes.

Louise has always been a bit of a tomboy, and one of her other great loves is cars and motorcycles. Her car and bike are her pride and joy, and she loves to exhibit the car at shows, and take off for long days out on the bike, with no one for company but herself.