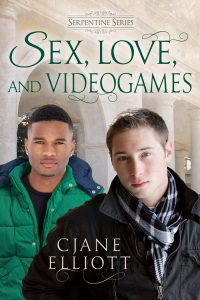 Sex, Love, and Videogames is on the Dreamspinner Coming Soon Page!!! Behold, the cover for my latest Serpentine Series novel, created by the wonderful L.C. Chase! I’m so excited to share this book with y’all. It’s the story of Jed, the shy, sweet guy Pete loved to trade BJs and play videogames with and then ignore in Serpentine Walls. (Bad Pete!)

I had no idea when I started writing this novel that Jed was going to fall for Charlie, who is unlike him in many ways, but very like him in others. Charlie is shy and sweet too. It was fun to write them battling their mutual shyness to finally get together! I also loved writing about Jed’s cousin, Morocco, a transgender female who is as outgoing as Charlie is introverted. She was such an interesting character and her story captivated me as I wrote it. Also, Bud (Pete’s cousin and Jed’s fellow rugby team player who we meet in Serpentine Walls) is back in a big way in this book and I really love Bud, despite all his clueless ways.

Here’s a snippet from the book. Jed and Charlie have finally made contact and expressed an interest in each other, and Morocco has dragged Charlie to see Jed at one of his U.Va. rugby games. The rugby team has varying reactions to seeing them on the sidelines.

“Okay, warm up laps!” Beau led the rugby team in a slow circuit around the perimeter of Mad Bowl. After a few laps, he stopped and had them do stretching exercises.

The other team did their warming up, and when they moved to take positions, Jed noticed a pair of people standing on the sidelines. His breathing stopped for a second. Charlie stood, hands in his pockets, shifting from foot to foot, while Morocco, a vision in a pink track suit, set up a camp chair (apt name, that) and sat down. Morocco saw Jed looking and waved. Charlie turned and gave a small wave himself, and Jed waved back, heart beating faster.

“Who’re they?” Bud asked, squinting over at them.

“Um, Charlie’s a guy who works at Lucky’s. In the gaming area. And the other is his cousin.”

“Um, well, about that….” Jed cut himself off because the referee blew the whistle. Time to play ball and hope he did well in front of those two.

The game proved the usual testosterone-fest, with lots of grunting and body contact. When Jed scored some points, Morocco produced pom poms that matched her outfit and waved them wildly.

At the break, Jed ran over to them for a minute to say hi—fuck what the rest of the team thought.

“Jed, child, my word!” Morocco fanned her chest. “Y’all are such manly men! Rugby is going to be my new obsession, I just know it!”

“I like it. My mom never let me play contact sports in high school, so I kinda love ramming into people.” Jed felt his cheeks flame at what he had said. Crap-a-doodle.

But Morocco laughed and Charlie faked a cough so he could smile behind his fist.

“So, hey, thanks for coming. I gotta go back now.”

Charlie nodded as Morocco said, “We’ll see you after the game.” She picked up her pom poms. “Wa-hoo-wa!”

When the team huddled before the second half, a homophobe named Welburn said with a sneer, “Who are those freaks on the sidelines?”

Another guy laughed. “Yeah. I thought all the he-shes lived in San Francisco.”

“What’re you talking about?” Bud peered over toward Charlie and Morocco. “That girl?”

Welburn spit on the ground. “That girl is no she. She’s a he. What the hell are they doing here?”

Beau raised his voice. “Hey, concentrate, guys. We need to win this game.”

Jed held up a hand to stop Beau from continuing. “Before we do that, you all need to know that those are some friends of mine. So shut your fucking faces before I shut them for you.” He leveled a lethal glare at Welburn and his compatriot.

Fueled by his anger, Jed played an amazing second half, and the team pulled out a victory on the strength of his points alone. After their team high five, he trotted over to Charlie and Morocco. Charlie smiled broadly while Morocco jumped up and down. “Jed, Jed, Jed! Wa-hoo-wa! Thass right!”

“Okay, okay.” Jed couldn’t help laughing at Morocco’s outrageous enthusiasm. “Thanks for coming to the game.”

“It was fun. I’m glad we came.” Charlie took a step back, seemingly surprised to have gotten two stutter-free sentences out.

“I’m glad too.” They gazed tentatively at each other, and Morocco suddenly got busy folding up the camp chair.