Guest Author: Renae Kaye, New Release – You Are The Reason 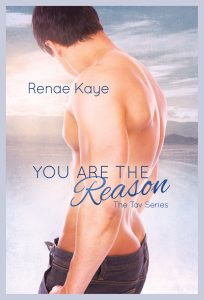 Welcome to the delightful Renae Kaye, who is here to share her new release You Are The Reason. Enjoy her hilarious look at the roller coaster that is release day (I can totally relate):

The highs and lows of release day

**Disclaimer – all situations are exaggerated for humour purposes.  Except one.  Now you get to decide which one.**

I want to thank CJane for having me on her blog.  It’s wonderful when people help you out by giving you a little screen time in front of their audience, and this is truly some of the highs of release day.  I say “day” – but it’s more like about ten days.  The build-up before and the build-up after the physical release all goes for over a week.

Releasing a new book is an emotional rollercoaster at the best of times.  Unless you are a prolific author who has already moved on to the next seven books in your writing list, or unless you are such a famous author, you know that no matter what you do you will sell a million copies, then you do have the rollercoaster of release.

I consider myself a small writer – not judging on sales, or reviews, or number of books out.  Simply that I am a single person, tapping away at my keyboard between the hours that my family duties allow.  I only have 24 hours in the day like everyone else, and most of these hours are taken up by something else.  I don’t have secretaries that I can ask to send my emails for me, or assistants I can ask to gather sites that I can advertise on.  I look with longing at those who do, and think to myself that one day it may be possible.

At every new release, my emotional rollercoaster starts off at The Nervous Wait, and then thunders straight into the station at The First Review.  That first review is nerve-wracking, and depending on who is putting it out, it can be make or break for a book.  I’ve seen books nosedive after a single bad review, even though all the others that came after it were positive.   At the same time, I’ve seen other books take off from a single good review – with over twenty replies saying they were heading out to buy it.

With The First Review behind you, you think, “Oh, wow.  That wasn’t too bad.”  You wonder what the fuss has been all about, and then next thing you notice ten people on your Facebook feed saying, “Going in to read this book.  See you all soon.”  It’s your first high and you experience it with eager eyes.

It’s rather an odd feeling, knowing that people all over the globe are reading the words you wrote.  You sit there and wonder, “Are they up to that bit yet?”

But no, no, no – this is no time to rest.  You must strike while the iron is hot.  You promote.  You talk to people.  You tour.

But the rollercoaster goes on.  You can’t stop the ride now that you’re on.  You can’t afford to patch yourself up, or stop for the belt if you didn’t bother to click it earlier.  You need to hang on and stumble through those bad reviews with whatever heart you still have.

I’ve had my share of people who dislike my work for reasons that have me scratching my head.  I had one reviewer say they don’t like twinks, and gave my story one star.  If you don’t like twinks, why pick up the book about twinks with the twink on the front?  I had someone return the book because it is set in Australia.  I’ve had people rate my book badly because they don’t like the cover, the blurb or even the last book I wrote.  I’ve even had people rate my book badly because their favourite author brought out a book on the same day.

After that, you never know what’s coming next.  It could be The Good Review, or another dose of The Bad Review.  The DNF Review is jarring when it happens, and can be disappointing.  Then the curves come.  The curves are slower, but can overpower you as you are stuck in one position due to that outward centripetal force.  You are inundated with messages of congratulations and well wishes.  Your loyal readers and beautiful friends are happy for you, are cheering for you, are showering you in confetti.  It’s a wonderful feeling, and you try to reply to them all.  But you’re stuck saying the same thing over, and fret that they don’t understand the depths of your gratefulness.

Coming on the heels of the endless curves, is the free-fall.  It’s that part of the rollercoaster you think is flying, but next thing your stomach falls.  It comes at The When’s-the-Next-One Question.  As an author, this is a question we love and loathe.  On one hand, we adore that the reader wants more, more, more.  But then you think about all the pain you went through to get this book out, and how long it took (and in my case, how incomplete my fifty-four WIPs are), and you cringe.  You’re puffing for breath by this stage.  The highs and the lows have addled your brain.  And now this reader wants more??

Coming on the back of this, are the speed-bumps.  You want to fly and race and climb, but the speed-bumps slow you down.  They have names, and occur frequently through the ride.  There is the You Have Sixty Emails To Look At bump, and the You Promised a Live Chat bump.  Sometimes it’s the Coming Down with a Flu scrape, or the Forgot Your Mum’s Birthday engine stall, or the Did You Realise You Should’ve Picked Up the Kids Ten Minutes Ago pot-hole.  Things are often threatened to be derailed by the No Food Left In the Cupboard hump, the When Did I Last Talk To My Husband dip, and the Did I Feed the Pets Today or Yesterday roundabout.

Then you enter The Sales Figures tunnel of ghosts.  Some authors close their eyes on this part of the journey, and never look.  I promise myself each time that I won’t look – only to end up peeking at The Ghosts of Books and Sales Past.  I don’t meant to compare, but I do.  This one only sold this many books.  Why didn’t this friend read this book?  The Sales Figures tunnel can be scary.  Every now and then it sparkles with light.  But will the torture end soon?

You exit the tunnel and you’re suddenly perched on the edge of a huge waterslide.  It’s the It’s Nearly Over Slide.  You’re up the top of the hill and you’re looking down.  The view is great.  You want to stay there forever, but at the same time, that slide is calling you.  To feel the wind rushing through your hair as you plunge down the slide.  It calls to you, and you jump on.

The rush is great and you hit the water with a huge splash.  That water is soothing and cooling.  It’s over.  You made it.  The rollercoaster is over for another release and you’re floating in water, resting and thinking over the ride.

If you’re an author, and this is you.  There is only one thing to do.  Swim for the side, mate.  Those who linger too long in the water drown.  Those who overdid the rollercoaster don’t have the strength to go for the side and also drown.   There are those who never surfaced again, and we don’t know where they are.  But the good authors swim.  They make the side of the pool and pull themselves out.  Then they stand with a happy grin and say, “Wow – how about that ride?  Shall we go again?”

In order to celebrate my release of You Are the Reason, I’ve organised a scavenger hunt.  I will be releasing ONE WORD as the hunt item on several stops of my blog tour.  In order to WIN an eBook copy of the book, follow along the blog tour and find a minimum of FIVE unique words.  Email the five words to me at [email protected] before August 16th to be in the draw.

I look forward to hearing from you.

BLURB – YOU ARE THE REASON

Davo’s a pretty average guy. He has a decent job, owns his own home, and spends his weekends at the pub. He fully accepts that he’s gay, but doesn’t want to be one of those gays, who are femme and girly. He likes football and other masculine pursuits, and firmly avoids anything that could be seen as femme—including relationships that last beyond fifteen minutes.

Then Davo’s friend and gay idol not only gets a boyfriend, but also adopts a baby girl. Davo is seriously spooked and scuttles down to the pub in fright. That’s where he meets Lee, who is cute from her cherry-red hair, to her pretty little dress and pointy red shoes. Davo is charmed—but how is that possible? He’s gay. Isn’t he? Then Lee tells him he’s actually a guy—he just likes to wear women’s dresses occasionally. Thoroughly confused about an attraction that’s out of character for him, Davo begins the long journey to where he can accept himself without caring what everyone else thinks.

Renae Kaye is a lover and hoarder of books who thinks libraries are devilish places because they make you give the books back.  She consumed her first adult romance book at the tender age of thirteen and hasn’t stopped since.  After years – and thousands of stories! – of not having book characters do what she wants, she decided she would write her own novel and found the characters still didn’t do what she wanted.  It hasn’t stopped her though.  She believes that maybe one day the world will create a perfect couple – and it will be the most boring story ever.  So until then she is stuck with quirky, snarky and imperfect characters who just want their story told.

Renae lives in Perth, Western Australia and writes in five minute snatches between the demands of two kids, a forbearing husband, too many pets, too much housework and her beloved veggie garden.  She is a survivor of being the youngest in a large family and believes that laughter (and a good book) can cure anything.