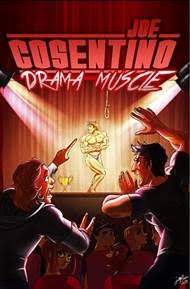 Joe Cosentino, author of many delightful books, has a new one out, the second in his Nicky and Noah Mystery series!

a comedy/mystery/romance novel by JOE COSENTINO from Lethe Press

It could be lights out for college theatre professor Nicky Abbondanza. With dead bodybuilders popping up on campus, Nicky, and his favorite colleague/life partner Noah Oliver, must use their drama skills to figure out who is taking down pumped up musclemen in the Physical Education building before it is curtain down for Nicky and Noah. Complicating matters is a visit from Noah’s parents from Wisconsin, and Nicky’s suspicion that Noah may be hiding more than a cut, smooth body. You will be applauding and shouting Bravo for Joe Cosentino’s fast-paced, side-splittingly funny, edge-of-your-seat entertaining second novel in this delightful series. Curtain up and weights up!

Praise for DRAMA QUEEN, the first Nicky and Noah mystery by Joe Cosentino from Lethe Press:

“Without doubt the funniest book I have read this year, maybe ever” “brilliant” Three Books Over the Rainbow

“I cannot stop laughing. Drama Queen is Hardy Boys-meets-Murder She Wrote-meets-Midsummer Murders, with a side of parodic, farcical, satire.” “Who-dunits don’t come more whodunnity than this.” Boy Meets Boy Reviews

“I’m hoping that this is just the start for Nicky and Noah. If Jessica Fletcher could have so many murderers in Cabot Cove, why shouldn’t the same hold true for Treemeadow College?” Scattered Thoughts and Rogue Words Reviews

“This fast-paced, hilariously funny, entertaining novel will have you on the edge of your seat as you try to figure out who-dun-it!” Joyfully Jay

“a murder mystery, a comedic romp, an investigative caper, and a love story all rolled up into one nifty little novel” The Novel Approach

“The tangled weave of murder mystery and other mysteries comes to a startling conclusion that is both satisfying and mind boggling.” MultitaskingMomma

“I am not used to reading books that make me snigger out loud, but in Drama Queen Joe Cosentino has struck a great balance between his use of tongue in cheek humour and a compelling mystery which we want to see solved.” Divine Magazine

“Nicky and Noah are two sexy leading characters who conduct the investigation in this comedic caper with wit and style.” Vance Bastian Reviews

“Cosentino does a wonderful job of writing a mystery that keeps the reader guessing right up until the end.” Barron Owens Reviews

“I love this story, just the right mix, of fun, hilarity and mystery in the mix. The storyline is fresh and well thought out, and the dynamic of the characters is through the roof!” Bike Book Reviews

“The author clearly knows of what he speaks on all matters theater, and the kind of authentic details he brings to the table in terms of characters and staging makes this immensely entertaining.” Love’s Last Refuge Reviews

“Joe Cosentino has brilliantly done it again! His latest novel, Drama Queen, is the most fascinating mystery of all time. I loved the laugh out loud moments and the crazy fast-paced plot. Readers will instantly be drawn into Joe Cosentino’s stunning mystery. I recommend this novel to readers worldwide and look forward to reading the next adventure by this talented writer.” Danielle Urban, Universal Creativity, Inc.