Rainbow Snippets, May 7,8 A Wild and Precious Moment 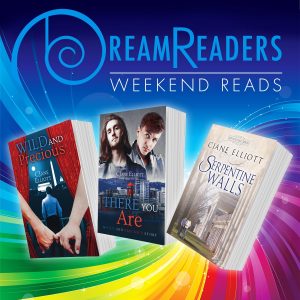 I’m excited because my books are the Dreamspinners Weekend Reads this weekend, which means you can get the three books above for $.99 each through the end of Sunday, May 8! The sale includes the first two books of the Wild and Precious Series and the first book of the Serpentine Series. Yay!

Get them here: Dreamspinner Weekend Reads

Since I’ve done so many recent snippets from Sand-Man’s Family, my newest release, I thought I’d do one from the first book in the series, Wild and Precious. The story centers on Brent, a guy who is exploring the world of gay sex for the first time with the help of Cody (you’ve heard of Cody….). But one of the complications is Brent’s massive crush on his boss, Graham. Graham is also attracted to Brent but still thinks Brent is straight and given he’s also Brent’s boss, he’s determined not to cross the line.

Here’s a steamy little snippet. They’re on a balcony of a ritzy hotel after Brent has recited his poem at his brother’s wedding reception inside. He’s just come out to his family and Cody is there as his date, but Graham doesn’t know any of this… yet. I’m going to go over six lines, but not TOO much over.

Graham cleared his throat, then said in a lower voice, “You’re a fucking incredible poet. I had no idea. Writing is so the right path for you.”

Warmed by the way Graham was staring at him, Brent stepped forward without thinking. And then Graham took his hand. An electric charge coursed through Brent’s body, knocking the breath out of him. He froze, mesmerized by the heat of Graham’s touch and the emotion in his eyes.

Graham leaned closer. Their connection was so strong, Brent couldn’t break away, didn’t even think of it. Then Graham looked down at their joined hands, gave a start, and let go with a pained expression.

Oh, my! Quite the electric moment in more ways than one! 🙂

Yes, ditto to the last comment. So much suppressed emotion in this riveting scene. Fantastic! 🙂

Ack! Denied! I wanted them to kiss! I was waiting for the kiss! I demand that they kiss!

Seriously, nice way to jerk the rug out from under my expectations.

Ooh, that was a sizzling snippet. Nice!

Ooo, and now I want to know why.

Oh. So much tension building up there and then that last line. 🙁