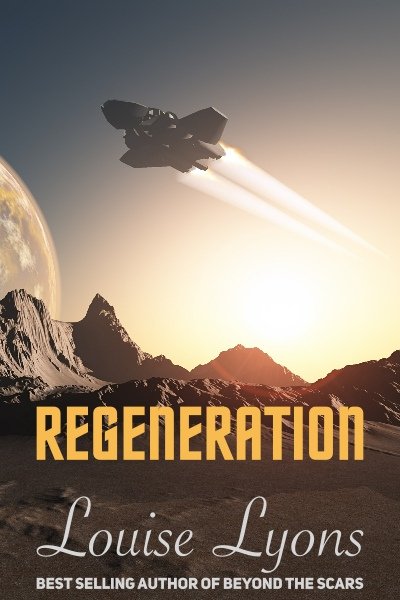 I’m happy to host author Louise Lyons on the blog today with a cover reveal for her upcoming novel, Regeneration!

In the 23rd Century in the galaxy of Sigma Kappa, Kim Fortune was the first surviving experimental enhanced human—a regenerate. Aged fifteen, he escaped the lab and years later, his failings as a regenerate and the suspicion of regular humans, leave him lonely and lacking in self-worth. Stranded on an abandoned planet, the arrival of a stricken ship and its crew give him hope that he may finally find what he always longed for—love.

Christian Novak is a successful regenerate with all the intended attributes—including lack of human emotion. Despite their immediate attraction to each other, Kim’s failing confidence, and Christian’s inability to empathize are a recipe for disaster. But war, imprisonment, and danger throw them together, and after each saves the other’s life, their feelings begin to change.

Can a seemingly unsuitable pair ever find love, or is a future together destined to fail?

Louise Lyons comes from a family of writers. Her mother has a number of poems published in poetry anthologies, her aunt wrote poems for the church, and her grandmother sparked her inspiration with tales of fantasy.

Louise first ventured into writing short stories at the grand old age of eight, mostly about little girls and ponies. She branched into romance in her teens, and MM romance a few years later, but none of her work saw the light of day until she discovered FanFiction in her late twenties. Posting stories based on some of her favourite movies, provoked a surprisingly positive response from readers. This gave Louise the confidence to submit some of her work to publishers, and made her take her writing “hobby” more seriously.

Louise lives in the UK, about an hour north of London, with a mad dog called Casper, collection of tropical fish and tarantulas. She works in the insurance industry by day, and spends every spare minute writing. She is a keen horse-rider, and loves to run long-distance. Some of her best writing inspiration comes to her, when her feet are pounding the open road. She often races home afterward, and grabs pen and paper to make notes.

Louise has always been a bit of a tomboy, and one of her other great loves is cars and motorcycles. Her car and bike are her pride and job, and she loves to exhibit the car at shows, and take off for long days out on the bike, with no one for company but herself.

Thanks so much for hosting me 🙂