Fathers are on my mind today. My own beloved dad passed away yesterday and although it was expected and he was 88 and had lived a full life, I’m still dealing with the reality that I will never hear his voice again.

If you have read Serpentine Walls, and when you read Aidan’s Journey, you’ll notice that both of the dads in those novels are what could be called an “alpha male” – successful, charismatic, and handsome. They are modeled on my father.

The story of divorce and family estrangement from the father told in Serpentine Walls came from my own life, as did the healing and re-connection that Pete starts to experience toward the end of the book. I am happy to say that I forgave my dad for divorcing my mother and re-marrying, and because that forgiveness came in my mid-twenties, I had many, many years of a good relationship with him, which I will always treasure.

On to Aidan’s Journey. Aidan’s father, Theodore, is only superficially modeled on my own, in terms of the alpha male characterization. Beyond that, Theodore is awful – an adulterer, cold to his wife and son, and a hypocrite hiding behind right-wing, religious platitudes.

For the excerpt today, I’m including two related scenes in which Aidan comes out to his father in a dramatic fashion on his graduation day from college. 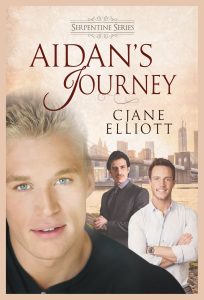 The star of the University of Virginia theater department, Aidan Emery is lusted after and admired for living out and proud. He uses his talent and good looks to his advantage and never sleeps with the same guy twice. But his glamorous patina has been carefully honed to hide the pain he carries inside.
Aidan wasn’t always such a player. He starts college naively romantic, hungry for the attention he can’t get from his workaholic father and mentally ill mother. Unfortunately, that leaves him ripe pickings for predatory professor Rodney Montgomery. Rodney’s flattering regard seduces Aidan into a dysfunctional relationship that destroys his innocence.
Life looks up for Aidan when he finally breaks free of Rodney’s pull and moves to New York City to make it as an actor. Meeting sweet fellow actor Patrick Jaymes seems like the start of a fairy tale. But before Aidan can rebuild his life into happily ever after, family secrets rip him wide open, leaving him easy prey when Rodney decides he’s not willing to let Aidan go.

The shit hit the proverbial fan at my college graduation. That was the day I lit a match and made a bonfire of my old life.

I’ve been reading lately about archetypes. The Destroyer archetype tears things down. It sounds terrible, but existing structures have to burn to the ground before something new can rise from the ashes. As a person who’d always hated to burn bridges, the Destroyer was exactly what I needed to make the final break from my old life. So I have to thank my father for providing the impetus for my Destroyer archetype to activate full force on my graduation day.

Father showed up to my graduation with none other than Geraldine O’Hara. From where I was sitting in the group of graduating fourth-years, I saw him come in late and rush to the VIP section to join Mother, Daphne, and my grandparents. Geraldine O’Hara trailed after him, although she veered off and sat in another row. I stopped breathing, enraged and upset for Mother, imagining how humiliated she must be. How could Father be so blatant as to shove his mistress in her face on such a public occasion, and right in front of his own parents? Their marriage had to be in serious trouble. I knew it was a sham, but I’d never considered my parents would break up. I felt sick.

We did the march in our robes, Lee and Jay beside me, and received our diplomas. Rodney sat on the stage with the other faculty, resplendent in his gown, stole, and cap, and beamed at me as I crossed the stage. After the ceremony, we all stood on the Lawn in knots of family and friends. My grandparents had split as soon as they’d congratulated me, and I wondered if their hasty departure had been spurred by the presence of Ms. O’Hara.

With a sense of the bizarre, I watched Father approach Rodney, and Geraldine walk over to join them. They smiled and talked while Mother and Daphne stood with me, not saying a word. I noticed Tish Walter standing nearby with Dr. Cantwell. She stared at Father and Rodney with dismay, and I stifled a sudden urge to laugh, remembering how she’d been all over Father last year when he’d come to the film fest.

Father broke away from Rodney and Geraldine and came up to us. “Congratulations, son.” He directed his gaze at Mother. “Cecilia, let’s go. We need to put in an appearance at President Keegan’s party. You too, Aidan.”

I narrowed my eyes at him. “Forget it.”

“What?” His face hardened into his commander-in-chief mask. “You’ll do as you’re told.”

Mother put on a strained smile and laid a thin hand on my arm. “Honey, let’s just go,” she murmured. “We don’t have to stay long.”

“Are you going to bring your mistress too, Father?” I asked in a carrying voice.

Rodney looked over at us, face concerned, while Geraldine turned and vacated the scene with brisk footsteps.

Father blanched. “Aidan, control yourself,” he hissed. “Come on, Cecilia.” He started to walk away, and Mother followed him.

“How about I bring my boyfriend?” I called after him. A few people turned their heads.

I shook her off, went over to Rodney, and took his hand. He stared at me, shocked. “Father!” I called. “Congressman Emery!” Father slowed and turned. “Hey, Dad. Just wanted you to know I’m gay. Dr. Montgomery here is my lover and we’ve been together for years. Still want me to come to President Keegan’s with you?”

One thing I’ll say for Rodney—instead of pulling his hand out of mine and feigning confusion or horror, he held on, lifting his chin and staring down all the prudes who regarded us with disgust, including Tish Walter, who shot Rodney a venomous glance.

Almost purple with rage, Father stomped away, Mother scurrying after him.

“Jesus Christ, now you’ve done it. Later, kiddo.” Daphne ran to catch up with them.

I barked out a laugh. People were still staring. “Oh, go fuck yourselves,” I told them, and held on tight to Rodney’s hand.

I took the elevator to the lobby, a touch incredulous that I wasn’t afraid. I was free! I didn’t give a rat’s ass what Father thought of me. I yam who I yam—Popeye’s words sounded in my head, and I flexed a defiant bicep as the elevator came to a rest.

When the doors opened, I saw Father, Mother, and Daphne emerging from a taxi out front. Perfect timing. I stood, arms crossed, and awaited my fate.

They came inside. “Hello,” I said in a mockingly formal voice. “Welcome. I trust President Keegan’s party was satisfactory?”

“Be quiet,” Father snapped. “I want to know what you were playing at with that disgusting display.”

I raised an eyebrow, unruffled. “Playing at?”

“Pretending you’re gay and with Dr. Montgomery. You were doing that to get back at me, and I won’t put up with such behavior.”

Taking a step closer, I pinned him with a steely gaze. “Read my lips, Father. I’m gay. And Rodney and I have been lovers since second year.”

Father swung his head around to glare at Mother. “You knew this?”

“Don’t jump on Mother. The world knows it, not just her.”

Father turned back to me and drove his fist into his palm. “You’re coming home with us. Right now. You’re not spending another day in this place.”

“You’ve fallen prey to evil influences.” He narrowed his eyes. “That fucker Montgomery, for one. If Keegan hadn’t already fired the bastard, I’d have his head on a platter for what he did to you.”

Daphne lifted her eyebrows in wry agreement and Mother gave a slight nod. It was strange to see all of them united. Until Father clarified, that is.

“He’s seduced you and gotten you to fall into a craven, sick lifestyle. He’s made you think you’re some kind of homosexual. I’m getting you away from that monster and getting you into therapy. Focus On the Family is doing wonderful work with the ex-gay movement.”

I raised my voice. “Dad! I’m gay! I was born this way and nothing’s going to fix that. It’s not a sin!” Rage swept through me. “You’re one to talk, you fucking adulterous hypocrite. Where’d Geraldine go?”

“Aidan.” Mother’s voice was pleading, and I saw the telltale trembling begin.

“I’m sorry, Mom. Sorry for upsetting you.” I went over to her, put my arms around her, and buried my face in her shoulder.

“Why don’t we all go grab a bite and cool off?” That was Daphne’s voice.

I raised my head while Mother continued to clutch me to her.

Father’s face was an implacable mask. “It’s not your fault. You’ve been led astray by an evil man. But I want you to promise me that you’ll go into therapy for this sickness. I’ll pay for everything.”

“It’s not a sickness. It’s who I am. Rodney didn’t turn me gay. I was born that way and I can’t change it. I don’t want to change it.”

“You’re saying that you refuse to get help?”

“Very well.” Our eyes locked. “Then don’t bother coming home at all. You are no longer welcome in my house.”

“Theodore!” Mother’s cry was sharp and full of pain.

Daphne stomped over and got in Father’s face. “Jesus, Theo, what are you doing? Aidan’s your son. Accept him as he is or you’re gonna lose him altogether.”

Father lifted his chin, his face grim. “I won’t condone his abhorrent lifestyle. I won’t have that… that darkness in my home.”

“Oh, for Lord’s sake.” Daphne turned away from him with an angry snort.

The elevator doors opened and Rodney came into the lobby.

“Good evening, all,” he began, poised and formal. He glanced around and hesitated when he saw the expressions on our faces.

“You!” Father started toward him, face dark, and I moved to stand between them, tensed for a brawl.

Who knows what would have happened next had the lobby doors not opened to allow several well-dressed senior citizens to come inside. One of the women glanced over at Father and did a double take. “Congressman Emery?”

“Such an honor to meet you.” She approached to shake his hand, and the rest of her group came with her, forming a circle around Father.

Daphne sidled up to me and murmured, “You take Rodney and get back to the apartment. Ceci and I’ll meet you at the C&O after we get rid of Theo. I’ll call.”