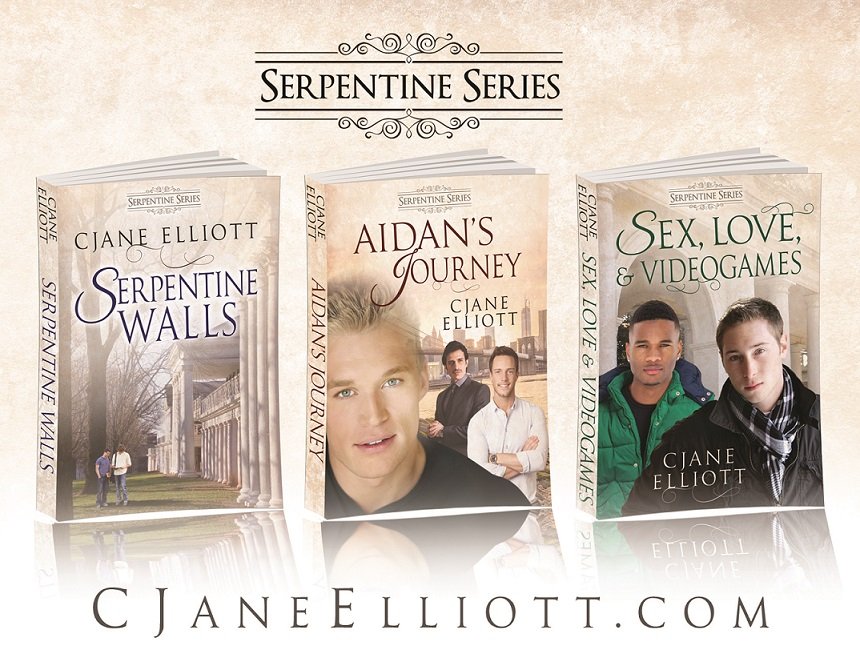 My other coming of age story is Sand-Man’s Family, which is part of the Wild and Precious series.

I’ve been thinking about my book Sex, Love, and Videogames lately and how much I enjoyed writing the characters of Jed and Charlie. Here’s a scene that didn’t make it into the final version of the book. Jed has just finished his freshman year at University of Virginia. He’s not yet out to his family and he’s had a long-time crush on Tucker, his brother Kent’s college roommate. Jed had always believed Tucker was straight, until he spied Tucker making out with glamorous gay-around-campus, Aidan Emery. This scene comes a short time after.

“Shoo! I mean it! Get away from there, dagnabit!”

Jed woke to his father’s voice, which was followed by a resounding crash and another curse, accompanied by Earnest’s barking. He turned over in his sleeping bag with a yawn. Dad’s battles with the local raccoons were a long-held tradition at the family cabin. A symphony of snoring in two-part harmony issuing from the two lumps on the other side of the loft floor informed Jed that Dad’s early morning skirmish hadn’t awakened Kent or Tucker.

He closed his eyes, determined to get more sleep now that it was summer break, but the birds outside were going nuts with their morning songfest. Besides that, the memory of seeing Tucker sucking face with Aidan started replaying yet again in his mind. Crap-a-doodle.

Groaning at his rapidly forming boner, Jed heaved himself out of the bag and grabbed some clothes. He could’ve beaten off right there, hidden by the down sleeping bag, but ew, gross and sticky. Holding his shirt in front of his hard-on, Jed clomped downstairs and scooted out the side door to the outdoor shower before Earnest got wind of him and wanted to come.

His boner wilted as he waited, shivering, for the ice-cold spring water to heat up. But once under the warm spray, it only took Jed conjuring the image of Tucker madly French kissing Aidan—they were so dang into it—for his dick to revive. And once Jed supplied his standard fantasy about Tucker’s gorgeous mouth on his cock, sucking him down, his orgasm followed in short order.

He allowed the water to wash away his come, his jaw tight. Jed wanted to confront Tucker so bad. But how? Uh, dude, are you, like, bi or something? What if Tucker denied it? Um, because I saw you and Aidan Emery… uh, you know. What if Tucker said it wasn’t him? And why should Jed even care? He couldn’t figure out a way to bring it up that didn’t reveal his own abiding interest in Tucker and his possible queerness.

Because if Tucker was queer…. Jed still didn’t know how to finish that sentence. If he was queer, then… what? Then Jed had a hope in hell of getting into Tucker’s pants? Jed didn’t even dare to think that. It was more like a hope that Jed himself could someday be who he was—gay—and have that not matter. Tucker hadn’t looked like it mattered who saw him that night, standing under the damn streetlight. Jed wondered for the hundredth time if Kent knew. If he did, then maybe he’d be okay with his little brother being gay.

Dried off and dressed, Jed went inside where Dad sat at the kitchen table studying a map. “Morning.” Earnest ran to him, tail wagging, and he stooped to pet him. “Hey, dogster.”

Dad lifted his head. “Morning. Hey, look at this. This hike looks interesting.”

Jed bent over to peer at what Dad was pointing at. “Haven’t we been on all the hikes around here?”

“Nope. There’s hundreds of them. It’ll take us years to try them all.” Dad heaved a satisfied sigh. “This one goes to an abandoned mine near some natural caves.”

“Um-hmm. You might find some fossils to add to your collection.”

Jed gave an assenting noise and opened the refrigerator to get out the orange juice. He’d been an avid fossil hound as a boy; he’d loved hiking with the Scout troop and finding new fossils. Caves had always fascinated him too. But he hadn’t pursued those interests in the last few years.

As he drank his OJ, Jed thought how his former passions of boyhood had faded. When he was around ten, he was crazed about collecting baseball cards, and Dad had helped him find all the obscure ones. It had been fun, even thrilling, when he’d obtain a new card. That phase had ended, Jed couldn’t even remember how or why. He still had his baseball card collection in a shoebox in his bedroom closet, though.

Dad threw down the map and stood. “Why don’t you roust the guys while I start breakfast? We can get in a hike before lunch.” He gave Earnest, whose tail was wagging furiously, a stern stare. “Don’t think you’re going.”

“All right, but you get to hold the leash.”

Dad shook his head. “For an ROTC guy, he sure loves his sleep. He’s going to get a rude awakening at Quantico.”

“Yep.” If he goes. Jed still couldn’t quite get his head around Kent becoming a Marine Corps officer, even though it had been Kent’s stated ambition since the eighth grade. But Kent was so wild—Jed had a hard time picturing him being confined to a military routine.

He went upstairs and walked over to Kent and Tucker, still sound asleep in their bags. Nudging Kent and then Tucker with his toes, he said, “Hey, guys. Wake up.” When they didn’t stir, Jed nudged harder.

“Fuck off,” Kent mumbled and turned away from Jed onto his side.

Tucker opened his eyes, blinking and bleary. “Wha…? ’S up?”

“Dad’s making breakfast and wants us to go on a hike.”

“Oh.” Tucker sat up. “Cool.” He surveyed Kent, who appeared to have lapsed back into slumber. “Good luck with that one.”

Jed snorted. “I’m not even gonna try. Dad’s going to leave a note in case he wakes up.”

Tucker stretched, lifting his arms, and Jed’s gaze went to the golden-brown skin where Tucker’s T-shirt had ridden up. When Tucker started wriggling out of the sleeping bag, no doubt sporting some impressive morning wood, Jed turned to look out the window, glad he was wearing baggy shorts.

“The cave should be around here somewhere.” Dad’s voice reached Jed from around a bend as Jed, Tucker, and a happy Earnest made their way through dense weeds. Jed and Tucker slapped at the cloud of gnats that seemed hell-bent on accompanying them.

“Muggy as crap today,” Tucker drawled, then stopped to drink from his water bottle.

Jed paused too, giving Earnest’s leash a tug when he looked ready to veer from the path and follow a squirrel. “No, boy, stay here. I’m glad Dad made us go early. It’s gonna be stifling this afternoon.”

“Yup. You know what that means, dontcha? Swimmin’ hole time!”

Jed smiled at Tucker’s enthusiasm, quashing an image of Tucker skinny-dipping, his golden muscles rippling as he launched himself into the water. Thank God Mom was around—she didn’t allow them to skinny-dip because she said she was outnumbered enough as it was.

Dad’s shout brought Jed back from fantasyland, and he and Tucker booked it down the path and around a tree to find Dad kneeling at the mouth of a small cave.

Jed kneeled beside his father and started sifting through the soil, while Tucker sat against a tree and lit up a cigarette, Earnest in his lap. Jed’s fingers encountered something hard and smooth. “I got something, wait.” He scrabbled in the dirt and then pulled out his prize. He and Dad studied it.

“Some kind of fern, I think.” Dad rubbed the face of the fossil. “They’re pretty common around here.”

“Yeah, could be.” Jed squinted at the faint markings.

“Naw.” Jed held up the small object to show Tucker.

Jed eyed Tucker lounging against the tree, rubbing Earnest’s head, and taking another drag off his cigarette. “Lazy bum.”

“No lie.” Tucker laughed as Jed stood and walked over to him. When Jed squatted beside him, he took Jed’s hand to pull the fossil to him for a closer look. “What’s it called again?”

“It’s a cycad fossil. I mean, I think that’s it.” Jed could feel his heart pounding in his ears from Tucker’s touch.

“There’s lots of fossils in Virginia that kinda look like this. We studied them in Boy Scouts, but Kent knows more about them.” Kent always knew more than Jed, no matter what Jed took up as an interest.

“Trail mix, anyone?” Dad held it up. “And don’t forget we’ve got Gatorade. Come here, Earnest, and drink your water.”

They rested by the cave as the day grew muggier and mosquitoes buzzed around their heads. Then Earnest stood at attention and started barking.

“What’s up, boy?” Jed put a hand on his quivering body. His question was answered by the sound of something crashing along the path.

A moment later, Kent emerged, red-faced and sweaty but with a big grin. “Eureka! Found you suckers! Boo-yah!” He kneeled to greet Earnest, who’d run up to him with joyous barks and tail wags.

“Hello, son, glad you could join us.” Dad’s calm demeanor contrasted nicely with Kent’s goofy vibrancy. “There’s an extra Gatorade and some trail mix in my pack.”

Tucker’s grin matched Kent’s until Kent bounded over to where he was sitting and plunked down on his shoulders. “Hey, off me!” He slapped at Kent’s legs.

“Nuh-uh. ’M tired. Gimme a piggy-back ride.” Kent reached over from his perch and knuckled the top of Jed’s head, then yelled, “Hey!” when Tucker pitched forward and deposited Kent on the ground. They promptly started a wrestling match. “Halp! Halp! Jed, save me!”

“Forget it.” Jed chomped glumly on trail mix as Tucker and Kent scuffled and hooted while Earnest circled them, barking. “Shush, dog.”

Tucker and Kent finally broke it up and lay panting and smiling on the ground.

“Jed found a fossil,” Dad said, calm as ever.

“Yeah?” Kent sat up. “Lemme see.” Kent’s knowledge of fossils was far superior to either Jed’s or their father’s. He held it up after Jed handed it to him, gazing at it thoughtfully. “Oh, interesting. This is from the Paleozoic Eera, and you only see these in the Appalachian region. They’re pretty rare. Good find, Jedders.”