Please welcome Christopher Hawthorne Moss to the site today! He has come to discuss issues of how GLBTQ people are represented in history/herstory.

FROM HISTORY TO HERSTORY TO OURSTORY

By Christopher Hawthorne Moss, author of BELOVED PILGRIM, a YA transgender historical adventure/romance

I remember when feminists coined the expression “herstory” to counteract the overt and subtle mascullinism of the word “History”. Of course, we all know that the “his” in “history” is not actually the masculine pronoun, but it was an acknowledgement that what we were taught in school was, in fact, the history of men. Women were a side issue. The impetus for developing “herstory” was to bring to light the equally central role of women in our past. The impact of this effort did more than just add female names and faces to the story of humanity. It helped change the way we looked at how we both learned of and interpreted our collective past. We stopped reciting the dates of battles and started looking at the records for clues to the actual lives of people of the past.

People who are gay, lesbian, bisexual, transgender and queer deserve a history/herstory too. There is even less record of our lives. Much of what we have in the records consists mostly of religious diatribes and criminal records, for that was the interface between the dominant culture and us: their attempts to control our behavior through threats and punishment. Sadly, there is little alternative if you want to tell our story. The evidence of our lives and loves is at best spotty.

That’s where I believe historical fiction can mend our lack of a history. Intelligent people realize that times change, but every type of person alive today has existed in every era. If the estimate that ten percent of people are GLBTQ now, then we were in those numbers at every point in the history of humankind. The capable storyteller can see the forest for the trees, that is, see just where and how people like us found a way to be no matter when. It is our job, in essence, to tell the stories of our forebears in sexual identity. That the people we write about may or may not have actually lived is irrelevant. They are our history… our story. As Monique Wittig wrote:

“There was a time when you were not a slave, remember that. You walked alone, full of laughter, you bathed bare-bellied. You say you have lost all recollection of it, remember . . . You say there are no words to describe this time, you say it does not exist. But remember. Make an effort to remember. Or, failing that, invent.”

Deprived of concrete records it is our job, and in the case of GLBTQ historical fiction sites such as Our Story – GLBTQ Historical Fiction, which I edit at http://www.glbtbookshelf.com, our purpose, to invent.

My novel, WHERE MY LOVE LIES DREAMING, used the title of a Stephen Foster song to introduce the ourstrical, to coin a term, tale of two men from different cultures who make a life together in spite of intolerance and also in spite of the American Civil War. More ambitious, perhaps, is my current novel, BELOVED PILGRIM, which attempts a plausible transgender character at the beginning of the 12th century CE. The main character is a woman who has known all her life that she is a man in heart and mind and takes the tragic event of her twin brother’s death to strike out as a knight, using his identity. The biological origins of transgenderism make it absolutely certain that people like this character did exist, everywhere and throughout time, and it is my job as a historical novelist to show how this could happen.

For more examples of how GLBTQ people may have lived and loved in times less tolerant and educated as now visit Our Story – GLBTQ Historical Fiction will provide a collecting place for that invention with book reviews and more. We want to hear about your work and your ideas. We want to know how you are writing another piece of “Our Story”. 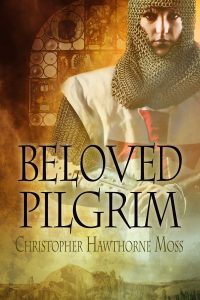 At the time of the earliest Crusades, young noblewoman Elisabeth longs to be the person she’s always known is hidden inside. When her twin brother perishes from a fever, Elisabeth takes his identity to live as a man, a knight. As Elias, he travels to the Holy Land, to adventure, passion, death, and a lesson that honor is sometimes found in unexpected places.

Elias must pass among knights and soldiers, survive furious battle, deadly privations, moral uncertainty, and treachery if he’ll have any chance of returning to his new-found love in the magnificent city of Constantinople.

Christopher Hawthorne Moss wrote his first short story when he was seven and has spent some of the happiest hours of his life fully involved with his colorful, passionate and often humorous characters. Moss spent some time away from fiction, writing content for websites before his first book came out under the name Nan Hawthorne in 1991. He has since become a novelist and is a prolific and popular blogger, the historical fiction editor for the GLBT Bookshelf, where you can find his short stories and thoughtful and expert book reviews. He lives in the Pacific Northwest with his husband of over thirty years and four doted upon cats. He owns Shield-wall Productions at http://www.shield-wall.com. He welcomes comment from readers sent to christopherhmoss@gmail.com and can be found on Facebook and Twitter.