Tell us about Finding Home — what do you love about it and what was the most challenging aspect of writing it?

Finding Home is the second book in the three-part Dropping Anchor series. I’ve just finished the third book, so I can unequivocally say that Finding Home was my favorite book in the series to write. (It feels kind of taboo to admit I liked writing one book more than the others, but it’s true!) There’s so much great flirting and banter, which is hands-down my favorite kind of dialogue.

I’d never intended to write Finding Home, which is another reason it’s my favorite. The main character, Ian Mackay, just wouldn’t stop popping into my head, and I knew I had to write his story. That’s never really happened to me before, so it was so much fun. We meet him in the first book as Niall Ahern’s best friend, and he’s just the biggest jackass. And he still is, but he has a lot of redeeming qualities, too. I think he’s been my favorite character to write—he’s incredibly flawed, but he’s also a good guy.

I’ve never written a series before, so hands down the most challenging part was maintaining character continuity. I thought it would be easier to write with characters that I’d already introduced in a previous book, but I found that it was actually much harder in some ways. I actually had to go through the first book, Island House, and take notes! For months, I had an entire wall in my study devoted to dozens of Post-it Notes with character attributes and details about places and people in the first book so I could make sure they all matched up if they were mentioned in the second. (And I did it again a few months later when I started writing the third book…too bad I hadn’t though to keep them! * g*)

What other (books, series) have you written? (or anything you want to say about past works)

It’s kind of hard for me to believe sometimes, but it’s only been a year and a half since my first publication. I feel like I’ve been at it a lot longer than that, but that’s probably just the sleep deprivation talking. * g*

The books in the Dropping Anchor series are my only novels. I also have a novella (The Buyout) and shorts that have been in various Dreamspinner Press anthologies. I love working on shorts because it gives me an opportunity to give a brief view into a character’s world, and in a lot of ways that’s more challenging than writing a full novel or novella because the limited space means limited details. My most recent short was Branded, which is my first foray out of contemporary. It was fun writing something set in a castle!

You’re a prolific writer and a busy person with a family, etc. How do you do it all?

I have two kids, so finding both the time and the quiet to write can be challenging. I’ll admit to being the mom at soccer practice who’s completely ignoring what’s going on out on the field (aside from the occasional “Hi, yes, I’m still here!” wave when one of them looks over at me) in favor of frantically working on my tablet. (And at the kids’ swim lessons, yoga, Zumba, and now, God help me, at hockey practice because my son has decided to pick that up, too.)

Mostly I have bursts of insane productivity mixed in with entire weeks or longer of not writing at all. Case in point: I wrote 31,000 words in about five days last week, and basking in the glory of that, I’ll probably write 0 for the next week or two.

I am by no means a morning person, but having young children kind of forces that on a person. My oldest just finished first grade, so I got into the habit of writing for an hour in between getting him on the bus at 7 a.m. and my four-year-old getting up about an hour later. I’m a freelance journalist, and that work is pretty hit-or-miss in terms of gigs, so I have to fit my fiction time in around paying jobs with that. I also write a lot at night after the kids go to bed. It’s not unusual for me to be up til 2 a.m. writing or working on edits, and then I’m up the next morning at 6 a.m.
My youngest will be going to kindergarten this fall, so I’m hopeful that I might actually get in some daylight writing time, which would be exciting. Mostly because it would mean I might get to bed earlier, which would be awesome.

What is your writing process?

I’m still settling in and figuring everything out, so to say that I have a writing process would be kind of generous. My first few novellas (and my first novel) were written without any kind of outline, and wow, I learned my lesson there. I’m so much more productive when I have a vague synopsis to go off of, mostly because it gives me a place to go when I hit a wall. If I know all of the high points in the book when I sit down, I can jump around whenever I get stuck and just start a different scene. It sounds like it should be frenetic and not work, but it gets me around writer’s block really well, and as long as I have the synopsis I’m pretty good at sticking to it.

I work best on a deadline, so when I’m fortunate enough to have one of those from the publisher it helps me set a writing schedule. For the last book in the Dropping Anchor series I knew I had to write 1,500 words a day, every day, to stay on target. I did, and it would have been great if the plot hadn’t taken a hard left once I was about 2/3 of the way into it, which was the reason I wrote 31,000 words last week. But I made the deadline and the twist really did help further the plot, even if it did mean the book was longer than I’d intended. 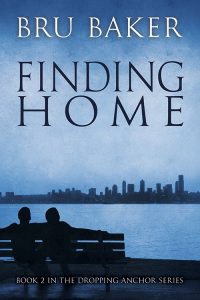 When an inheritance fell in Ian Mackay’s lap, he fled the high-pressure banking industry and didn’t look back. Since then, he’s spent four years living carefree on the island of Tortola, his life a series of hookups and hanging out with friends.

After his best friend moves to Seattle and gets married, Ian finds himself lost. His unapologetic existence doesn’t hold the same appeal, and he wonders if he’s throwing his life away. After visiting Niall in Seattle, Ian decides to stay, but that means taking his life off hold and finding a real job. Meeting Luke Keys, who is about as far from a player as possible, isn’t the plan but might be just what Ian needs. Luke and his values intrigue Ian, and he pursues Luke ruthlessly until Luke agrees to a date.

Their courtship sweeps Ian off his feet, and when the relationship gets complicated, Ian has the chance to cut and run. Habits born from years of being on his own are hard to shake, and self-proclaimed playboy Ian must decide if love is worth fighting for.

Finding Home is available through Dreamspinner Press, Amazon, Barnes and Noble, AllRomance, and other book retailers.

Bru Baker is a freelance journalist who writes for newspapers and magazines. Fiction makes her happiest, whether it’s creating her own characters or getting caught up in someone else’s. She and her husband live in the Midwest with their two young children, whose antics make finding time to write difficult but never let life get boring.