Happy Holidays! My new novella, Wild and Precious, takes place over the span of one year, starting in summer and ending in spring. I enjoyed setting the story in the Washington, DC area, which has actual seasons! (Oregon kind of has them, but they’re not as distinct.) 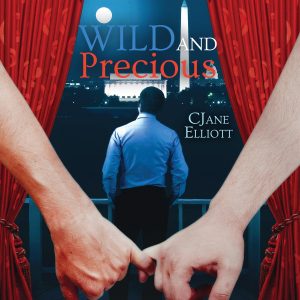 Aspiring writer Brent Granger has good friends and a great job at an arts magazine in DC, but he’s batting zero in the arena of love. Brent begins to get a clue why things aren’t working with women from his strong attraction to his gorgeous, gay, and already attached boss, Graham Stoneford.  When he sees a personal ad from a man that quotes his favorite poet, Brent decides to do something wild and answer.

Enter Cody Bellstrom, easygoing bisexual musician, who is happy to initiate Brent in the ways of gay sex. Brent now has a new problem: he realizes he’s gay and no one in his life knows it. Cody tires of hiding their relationship, but Brent finds it challenging to come out to family, friends, and especially to Graham. In the end, Brent must confront the truth of where – and with whom – his heart lies.

Here is an excerpt from the book that is set during the Christmas season. I like this excerpt because it shows the struggles Brent is going through in coming out and how his first lover Cody is affected by that. It also gives you a glimpse of gorgeous Graham, Brent’s boss.

Christmas music floated in the air.

Brent sat at his desk, typing like a madman, trying to get his article finished before deadline.

It didn’t help that the noise in the office had been escalating steadily as the staff finished for the day and started getting ready to head out for their annual holiday party. Everyone was in a festive mood, so festive that some had started the party early, breaking open the booze and passing around a platter of Christmas cookies.

Graham came sailing through, singing along to the music in an incredible voice. Of course he’d have a great voice too, thought Brent. Unreal.

Graham paused at Brent’s cubicle. “Still working? Hurry it up, Granger, don’t want you to miss the party.”

Brent couldn’t help but smile when he saw the holiday touches Graham had added to his outfit. His glittery Santa hat and neon reindeer tie made him look ridiculous yet somehow glamorous in a way only Graham could pull off. He’d even put on eyeliner, which highlighted his striking eyes, not that Brent was thinking about Graham’s eyes. Much. Okay—yes, Brent had to admit he loved Graham’s eyes as much as he loved Graham’s outrageousness. It was good to see him in a better mood these days.

“I’m hurrying. If everyone would shut up and leave me alone….” He paused, realizing he’d just told the boss to shut up, and laughed.

Ari popped up from the other side. “Wow, someone’s feisty tonight. You must be getting some, you’ve been in a good mood for weeks.”

Graham grinned. “He does seem quite chipper these days, doesn’t he? Who’s the lucky girl?”

Brent’s face grew warm, and he kept his eyes on the computer screen, although he’d stopped typing. “No one you know. Now, can you let me finish this damn article?”

Ari let out a whoop. “I knew it! Are you bringing her to the party?”

“Yes, sir!” Graham gave him a mock salute and walked away, saying over his shoulder, “See you later, then. Don’t be late.”

Ari continued to stand there, regarding Brent with a shit-eating grin. In desperation, Brent turned to him. “Okay, I’ll spill, but after I finish, so, please, go away for half an hour.”

When Ari came back, the office was quiet, everyone else having left for the party. Even so, Brent stood and scanned the room before gesturing to Ari to join him in his cubicle.

“So? Who is she? Do I know her?” Ari beamed at him like an eager puppy.

“Oh. Oh, wait, when Lexie was going on about setting you up? Oh, God.” Ari guffawed. “That must have been awkward.”

“A little, man, but what the hell. Whatever makes you happy. And you seem happy these days.”

Gratitude surged through him for the way Ari was taking this. “I am. I’m glad you’re not freaked. You’re the first person I’ve told.”

“Really? I’m honored, man. So, you bringing him tonight?”

“I—no, I don’t think I’m ready for that yet. I’m only going for a little while.”

Ari opened his mouth, like he wanted to say something to that, but then shrugged.

“Whatever. Come on, before they drink all the booze.”

Cody sprawled on the couch, playing guitar. Brent’s apartment was still. He looked at the clock. 11:30 p.m. Giving the strings a sudden smash, he threw down the guitar and fumed. Brent had said he wasn’t going to his work party for long. That was four hours ago.

“Fuck this.” Cody grabbed his cell and pushed a speed dial number.

Bette picked up on the second ring. “What’s up, baby?”

“I didn’t wake you?” Cody lay down, picking at a thread on the sofa cushion.

“Naw, I’m reading, Aurora’s asleep, what else is new? But why are you calling me instead of gettin’ it on with your man?”

“Because my ‘man’ is at his company Christmas party and about three hours late getting home.”

“I guess.” Cody shifted to his side and stared at the mess of newspapers on the coffee table. “I had an interesting visitor tonight.”

“Brent’s brother Darrell came over. He wasn’t reaching Brent on his cell, so he decided to pop in.”

“Jeez. What’d you tell him? He still doesn’t know about you guys, does he?”

“No, we’ve never even met. I made something up about being a friend from the magazine, that I came over to work on Brent’s computer. Whatever. He didn’t care.”

Cody took in a breath and let it out slowly. “Yeah. He said he needed to reach Brent about the tux for the wedding, and to remind him that their parents are coming in on Thursday for the rehearsal dinner.”

Bette made a surprised noise. “Wedding? Who? Darrell?”

“Apparently. Yeah, apparently, Brent’s brother is getting married on New Year’s Day, Brent is the best man, and Brent’s parents are coming to town, and guess who knew nothing about any of this? Brent’s boyfriend who he’s been sleeping with for the past four months.”

Cody’s throat got tight. He took another deep breath, surprised at the amount of emotion welling up.

“Oh, baby, that sucks. Brent is such a love, but you knew going in this wasn’t going to be easy.”

“Did I?” Cody didn’t remember knowing anything of the sort. It had all been fun and games at the beginning: initiating the straight boy into the world of gay sex.

“Well, you can’t say we didn’t warn you once we saw you were getting involved.”

“True. You guys tried to tell me in Cape Charles.”

“Right. I don’t know, hon, maybe he’s just a bi-curious straight boy. Maybe it doesn’t go deep enough for him to overturn his life.” She hastened to add, “I don’t mean you. I know he cares about you. I mean him being gay or bi or whatever he is.”

Cody heaved a sigh. “Now I remember why I stay away from straight boys. But I think Brent’s gay. He practically said so.”

“He told me everything finally makes sense about his sexuality.”

“Yeah. But coming out is hard. I don’t have a problem with him doing it on his own terms. It’s just—wait, he’s home. Thanks, sweetie, love you. I’ll call you tomorrow.”

Cody sat up and prepared to have it out with Brent.

Brent heard Cody talking as he unlocked the door. It took him two tries, given all the alcohol he’d imbibed at the party. He’d had a great time, though—singing, drinking, and even dancing when Graham had pulled him onto the floor with a bunch of them, Brent unable to take his eyes off Graham’s fabulous dance moves. Yep, a great time. Such a great time that he’d been shocked when he’d checked his phone and realized he’d been at the party for three hours, rather than the hour he’d planned on. Thank God the Metro ran late on Friday nights.

Pushing open the door, he stumbled in. Cody sat on the couch, his guitar next to him, and Brent eyed him, trying to figure out whether or not Cody was angry. He certainly wasn’t saying anything.

“Hey there. Sorry I’m late.” Brent wove his way to the couch. “Oh, man, I’m drunk.” Pushing the guitar aside, he plopped down next to Cody and took his hand.

“Have fun?” Cody’s face was a polite mask, his hand unresponsive in Brent’s.

Brent gave a noncommittal grunt, a picture coming unbidden into his mind of him and Graham leaning shoulder to shoulder, belting “We Are the Champions” with the karaoke machine.

“You had a visitor.”

Brent didn’t miss the ice in Cody’s voice this time, and tried to focus. “Huh?”

“Your brother came by. To remind you about the tux? And the rehearsal dinner? For his wedding? That you somehow failed to tell me about?”

Cody had risen without a word, grabbed his jacket and his keys, and headed for the door. “I’ll be at my place.” The door slammed shut behind him.

Brent keeled over on the couch and watched the room spin. After a few dizzy-making revolutions he closed his eyes, deciding to think about it in the morning, and plunged into a drunken slumber.

Did you know that Dreamspinner Press is having a holiday sale on all novellas through December 13th? You can pre-order Wild and Precious and while you’re at it, check out my three other novellas on my author’s page: CJane Elliott Page.