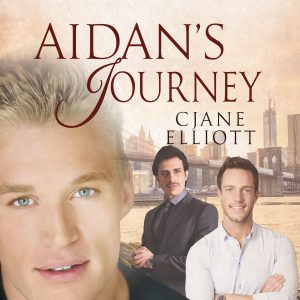 Merry Christmas Eve! I bring you an angsty holiday snippet from Aidan’s Journey today. Rainbow Snippets is an awesome Facebook group of authors and bloggers who post snippets from LGBTQ works every weekend. Catch up with all the snippets here: Rainbow Snippets.

Aidan’s Journey remains the darkest story I’ve written. Aidan was a memorable character in my first Serpentine novel, Serpentine Walls, but he caused a lot of pain to Pete, the MC. I needed to know why he ended up being a manwhore who couldn’t commit.

In the book, we see Aidan deal with a cold father, a mentally ill mother, his own clinical depression, and an abusive relationship he was lured into when he was 17. It’s a romance, though, so rest assured he gets to his hard-won happy ending!

This snippet comes in Aidan’s senior year at college. He and Rodney, the nefarious professor, have been together off and on for several years but Aidan plans to leave him at the end of the school year. He goes with Rodney to visit Rodney’s parents in London for the holidays, no longer in love with him, but not willing to break up at Christmas.

That night, after his parents went to bed, Rodney and I lingered in the living room. Soft music played in the background, the room lit only from the dying fire and the twinkling colors on the Christmas tree. We kissed and held each other, and it was so romantic I could hardly stand it. My hopes for us had almost died over the last few months. To have them flare up again was painful, like a numb limb coming back to life.

Oh my! Here’s to much happier holidays for all of you. See you in the New Year.