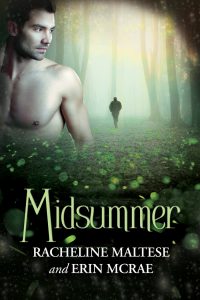 Please welcome to the blog authors Erin McRae and Racheline Maltese, who are here to talk about their new release, Midsummer.

Midsummer is an M/M May/December gay-for-you summer romance, set at a summer stock production of deep in the Virginia woods. Racheline and I often write stories about how stuff works behind the scenes, so we’re particularly excited about this backstage story.

Summer stock companies more or less like Theater in the Woods — the fictional theater troupe Midsummer — exist all over the U.S. And as in our other backstage stories, in Midsummer we’ve tried to hew the line between the dictates of drama and story, and how stuff really works, in the real world.

To some extent summerstock really is, as various characters describe it in the book, theater camp for grownups. Productions are usually Equity shows that provide opportunities for emerging artists to earn a salary and recently turned professional artists to earn their Equity cards. Often, well-known actors will participate in summerstock productions at big-name theaters in order to improve their reputation as a serious actor or just get back on the stage.  Their presence can be a big draw for these small theaters.

Ultimately, a summerstock company consists of a few dozen people — the exact number depends on the size of the production and relevant support staff — semi-trapped together for a season, often in very close and, at times, unideal accommodations. They live in theater housing, eat together, work together and, when the rehearsal and set-building is over for the day, play together.

There are a lot of union rules involved with summerstock, as in all theater productions: who can do what work (and often, what work union members aren’t obligated to do); who gets what kind of rooms, etc. For the most part, we’ve tried to stick to the broad outline of those rules without bogging ourselves or our readers down in details; Racheline is a union actor, and we spent some time going back and forth with our editor over whether our readers would understand a reference to a particular Equity status (EMC). But we also let these rules slide in places where it served our story better. Let’s face it, we wanted John, our protagonist, shirtless and covered in paint at one point, and we hope you will too.

John Lyonel, a long-time theater professional and teacher, heads to Virginia to play Oberon in the Theater in the Woods’s production of A Midsummer Night’s Dream, intending to focus on his work. John is recovering from the tragic loss of his family and needs a break. The last thing he expects is to become captivated by Michael Hilliard, the professional actor playing Puck, especially since John has never been attracted to men, let alone one so much younger.

They rush headlong into an affair which falls apart dramatically over secrets that John and Michael are keeping from each other. A steep learning curve, the gossipy cast of the show, and the sometimes sinister magic of the woods conspire to keep them apart. But stage lights and stars might work their magic and help them define a new future.

Erin McRae is a queer writer and blogger based in Washington, D.C. She has a master’s degree in International Affairs from American University, and delights in applying her knowledge of international relations theory to her fiction and screen-based projects, because conflict drives narrative.

Racheline Maltese lives a big life from a small space. She flies planes, sails boats, and rides horses, but as a native New Yorker, has no idea how to drive a car. A long-time entertainment and media industry professional, she lives in Brooklyn with her partner and their two cats.

Together, they are co-authors of the gay romance series Love in Los Angeles, set in the film and television industry — Starling (September 10, 2014), Doves (January 21, 2015), and Phoenix (June 10, 2015) — from Torquere Press. Their gay romance novella series Love’s Labours, set in the theater world — Midsummer (May 2015), and Twelfth Night (Fall 2015), is from Dreamspinner Press. They also have a story in Best Gay Romance 2015 from Cleis Press and edited by Felice Picano. You can find them on the web at http://www.Avian30.com.

Costume fittings and dress rehearsals means that John finally gets to see Michael costumed as Puck. The human characters are dressed contemporarily, in suits and cocktail dresses that become increasingly disheveled as the show goes on. The fairies, though, are dressed in greens and browns with crowns of strange wildness — thistles, cornsilk, and Queen Ann’s lace. Michael as Puck looks deeply inhuman, covered in leaves as if dragged in from the wooded grounds. For their first dress rehearsal, it takes all of John’s considerable experience and willpower to actually focus on the play and not Michael. As taken as Oberon is meant to be with Puck, he should actually be able to remember and deliver his lines.

“Whose idea was this?” he asks Michael afterward, catching him before he can change. Michael blinks at him with eyes done up in silver and green. John wants to devour him.

“Do you like it?” Michael asks, more distant and coy than usual, sliding his hands up John’s chest which, like his own, is bare.

All John can do is groan when Michael looks up at him from under his lashes. He stands on his tiptoes to kiss John briefly, and then vanishes. When he reappears he’s Michael again, in t-shirt and shorts, but John can’t forget the image of him transformed.